WWF today released an update to their Reef policy scorecard for the Queensland state election, now less than five days away.

The scorecard has been updated to include gradings for the Liberal National Party’s current policies. The LNP’s grades were missing from the original scorecard published on Saturday 24th January due to no response being received by WWF. After an extension of time was given, and no subsequent announcements were made, the updated scores have been based on the existing policies of the current LNP Government. 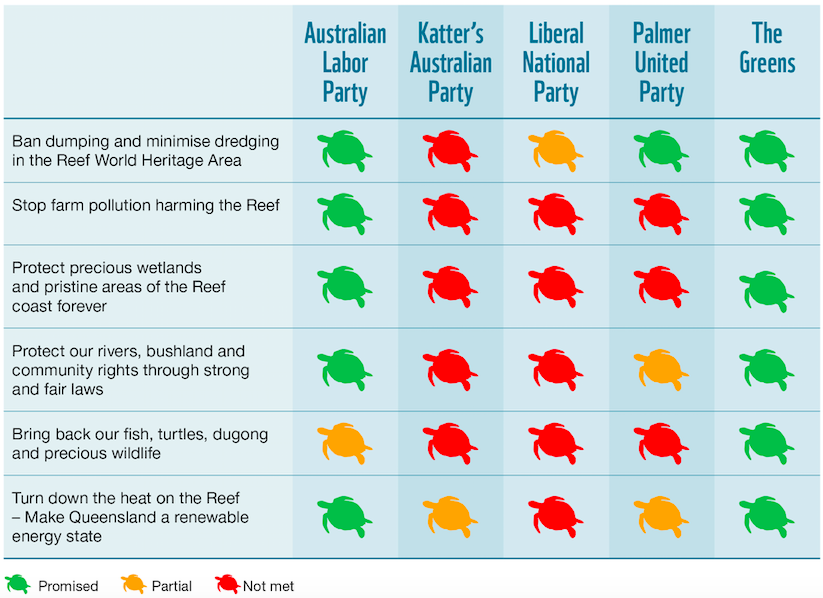 WWF-Australia CEO Dermot O’Gorman said time was running out for the Premier to commit to the bold policies needed to save the Reef.

“The Reef is a mainstream issue in this election. Queenslanders expect all political parties to have bold and sufficiently funded policies to turn around the decline of our greatest natural icon,” Mr O’Gorman said.

“The Reef generates $6 billion a year and supports 60,000 jobs. It’s crucial to Queensland’s future. Restoring the Reef’s health is not only critical from a conservation perspective, it is vital for protecting the thousands of Queensland jobs that depend on it.

“Despite a clear deadline, and an extension, the LNP have not yet provided any new Reef policies. All other parties, PUP, Katter, ALP and The Greens, were able to make last Saturday’s deadline.

“WWF’s final scorecard will be published in Thursday’s Courier-Mail newspaper.

“Close of business on Tuesday will be the last opportunity for any new policies to be included in our final scorecard. WWF will include any new Reef policy commitments from the LNP or other parties.

“There’s still time for the Premier to make bold new policy commitments for the Reef.

“WWF is a science-based, non-partisan conservation organisation that has developed six detailed solutions to protect the Reef for future generations,” he said.

ANZ should not leave Cambodian community ‘high and dry’