A 7-year-old girl with cancer has started a whole new craze after Australia’s social media community was inspired by her creative response to being bullied for losing her hair.

After intense treatment for a cancer called Wilms Tumour, which led to her having a kidney removed, Jordyn Miller from Wingham, NSW, was most heartbroken about losing her long wavy hair. On her first day back at school after treatment, she was reluctant to remove her hat: 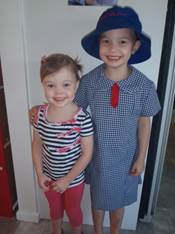 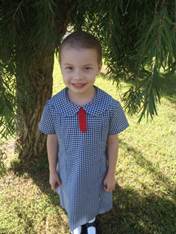 Unfortunately, Jordyn’s anxieties were well-founded. She was called ”ugly” and “a boy in a dress” by pupils who didn’t understand what she’d been through.

Jordyn’s response was to put a pair of her little tights on her head and say: “This is my beautiful long hair! Her younger sister Charli copied the gesture, to show her support: 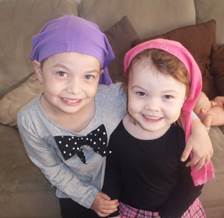 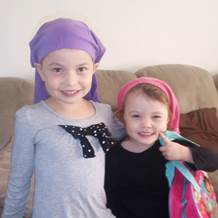 When Camp Quality posted this story on its social media pages, it was widely shared and one user suggested that the social media community post pictures of themselves with tights on their heads, to show support and solidarity with Jordyn, and to prove that, in fact, #Jordynisbeautiful

Once the idea started catching on, the hashtag #tighthairdo was used and Camp Quality set up a text donation platform, so people could donate via their mobile and nominate the next friends they wanted to see post a #tighthairdo.

Jana Cooper, Camp Quality’s Marketing Manager, said: “The point of difference between this campaign and the Ice Bucket Challenge or the #nomakeupselfie, is that the whole idea centres around kids: it was created by kids, it raises money for kids and we’ve seen many kids get involved. Something else that makes it unique is that it was born in Australia and it uses an Australian text donation service: simply text “Jordyn” to 0476 000 222 to donate.”

Tarin Miller, Jordyn’s mum, said: “Jordyn is a girly girl so losing her long wavy hair was a very big deal for her. Putting tights on her head was her way of trying to cope with unkind comments from older kids, who called her ugly and teased her for wearing a dress as they thought she was a boy! Once Camp Quality sent their anti-bullying puppet show, there was a vast change in the kids’ attitude as they understood more about what she’d been through.”

All funds donated to the campaign will help fund Camp Quality’s touring puppet show for schools, which teaches pupils how to be supportive and understanding of kids living with cancer, to prevent and tackle teasing, pointing, staring, name-calling and bullying when a child returns to school post-treatment.

To support the campaign, the public is invited to post a picture of themselves sporting a #tighthairdo to their social media pages and nominate the friends they’d like to see do a #tighthairdo, with a suggested donation of $5 per nomination by texting JORDYN to 0476 000 222. Donations can also be made online at: www.mycampquality.org.au/tighthairdo

Aussies challenged to be ‘Tough Blokes’ to help kids with cancer